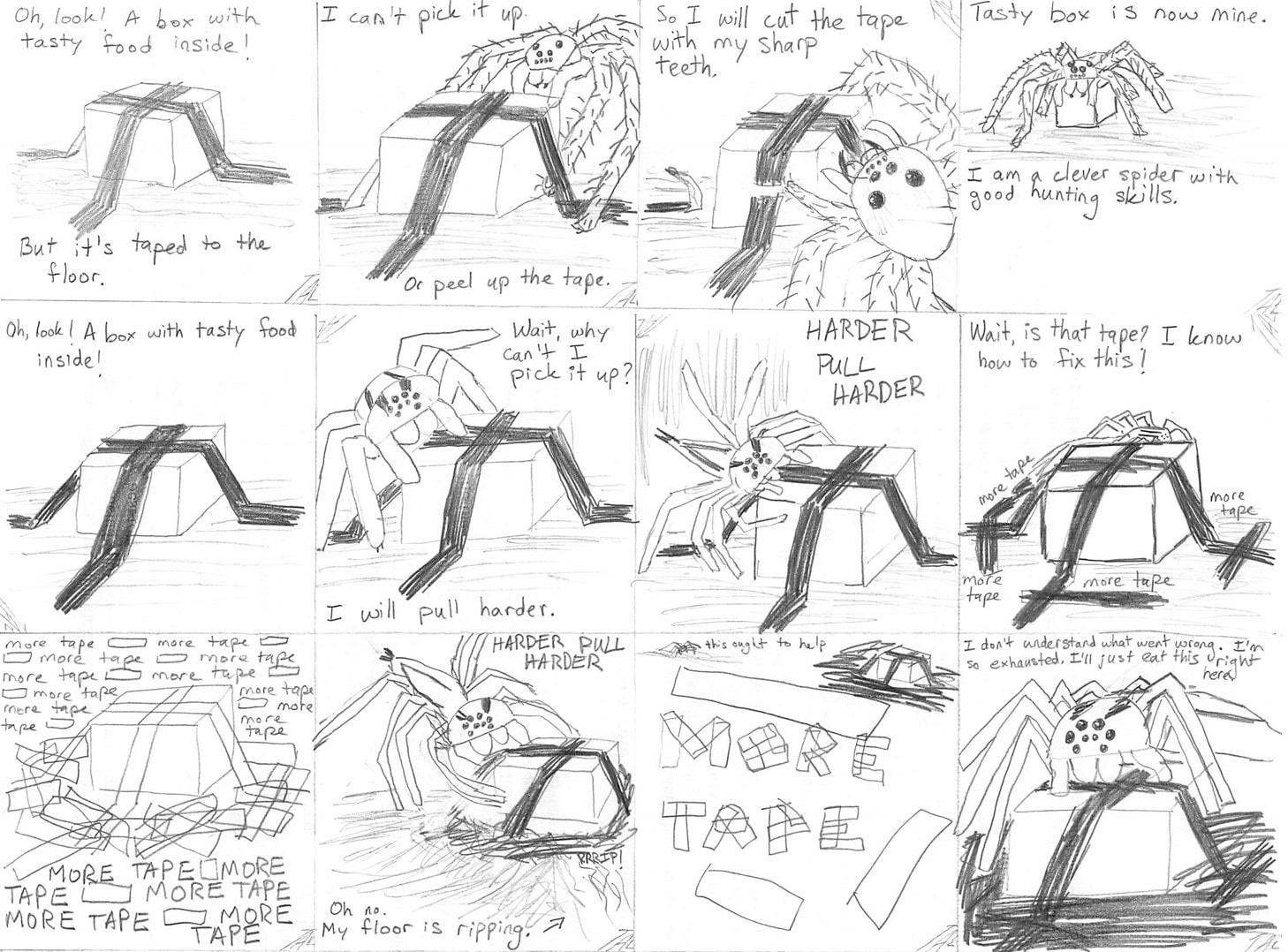 Wolf Spider (Family Lycosidae) addresses the issue of a stuck prey item. (first row)
Clarice faces the same problem and deals with it in her own way. (beginning second row)
Have I introduced Clarice? Well, she's my mudroom spider, a grass funnel weaver (Agelenidae). The other night, I found a beetle in the bathroom. Like any friend of spiders, I captured it and dropped it in Clarice's web.
She ran to it immediately, wrestled it, bit it, and stepped back. When it stopped moving, she began to drag it towards her funnel-retreat, planning to eat it inside (typical Agelenidae behavior). On the way, the beetle became ensnared in a different spot of Clarice's web. She tried pulling on it with her pedipalps. Nothing happened. She used her pedipalps and first pair of legs. No luck. Clarice then proceeded to walk in circles around the beetle, laying down silk with her long spinnerets. Then she tried pulling on the beetle again. Still no luck.
So next, she grabbed the beetle with her first three pairs of legs, the fourth pair stretched out behind her, and pulled with all her might. I heard tiny ripping noises as she tried to pull the beetle from her (very strong) web. She resumed walking in circles, adding more silk. She took occasional breaks to try and pull the beetle out, and a few feeding breaks too. Eventually, she gave up and settled down to eat the beetle in place.
Now, this circling behavior seems counterproductive to me. It is possible, I admit, that its purpose is to reinforce the web before cutting out the strands immediately surrounding the prey. I've seen holes in funnel webs with reinforced edges. But Clarice made no move to cut any strands. Nope, not her. She was determined to simply pull the beetle up.
So, I drew a comic illustrating the behavior of a 'normal' (smarter?) spider in this situation, and then one illustrating Clarice's 'solution.' She is maybe not the brightest spider....

Anybody have any insight on this Agelenidae behavior?

The “more tape” is funny, I have ideas but really only would be guessing as to why she did that.

Even if your ideas are just speculation, I’d love to hear them! I’d like to think Clarice knows what she’s doing, but I’m just not convinced. I have a friend who wraps packages like Clarice. MORE TAPE. Always more tape. Tahahaha! Our community here could design an entire house/office/world full of the spider-themed products that don’t exist yet but need to. I got a spider-web coaster 3D printed from a pattern* I found online. Since you mentioned a tape dispenser, I searched Thingiverse and found tape dispensers in the shapes of a T-Rex skull, a hedgehog, a whale, a shoe,… Read more »

Update on Clarice: Clarice may be smarter than I’ve given her credit for. She came to me and asked to be let outside so she can find a male to mate with. At least, that’s what I can figure from her behavior. I’d been feeding her regularly, dropping prey items into her web, and after the last one, she disappeared. She usually hides for a day or so when she’s about to molt, so I wasn’t worried.  Then there was an electrical project that required turning off the power to the mudroom (it’s still off), making it pitch black out… Read more »