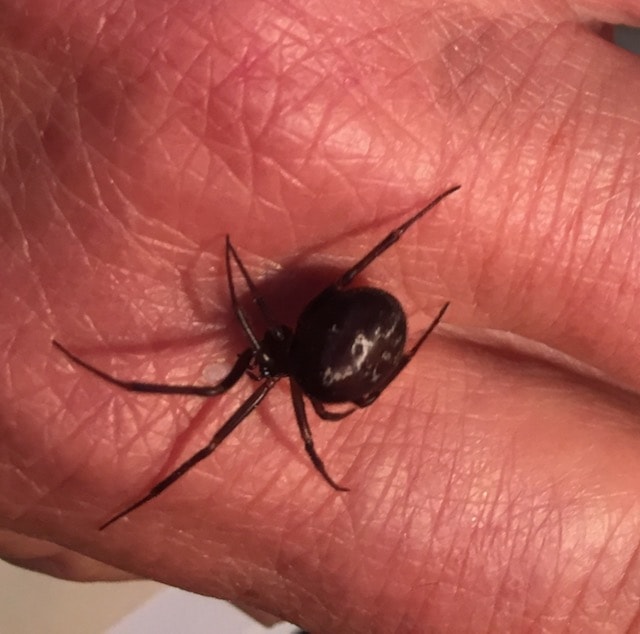 George-the-Spider is probably female and should be named Georgette. We met at our water meter in May, when I began to record water use during the California draught. George made her home in the dry, dark concrete box in our sidewalk that houses the meter.

Everyday, I'd pull back the heavy concrete lid and there'd be George nearly invisible in her tangly web, near her fluffy egg sacs. At first, she would try to hide when I opened the top, but as months passed, she ignored these intrusions.

Today, nearly eight months after we met, our first heavy rain of the season dropped and when I opened the meter box for a read, disaster! George's cozy, dry spider home was flooded to the top. I frantically scanned the floating debris and a little round piece moved! I gently floated it onto my hand and---miracle---it was George, alive and uninjured!

Had I waited another day, with continued heavy rain predicted, I believe I would have missed the chance to save her. High and dry on my hand, George, a wet spider-ball, slowly unfolded her legs and began a spider walkabout on the back of my hand. Now I'm not wild about spiders walking on me, but this was different! George is my friend!

What kind of spider is George?
A couple months ago, my wife gave me a wonderful book, "Field Guide to Spiders of UC Santa Cruz", by M. Hash. In it I found that George is a Steatoda grossa*, close cousin to the infamous Black Widow. Unlike her venemous cousin, George is harmless and book says "they prefer undisturbed, dark places, under closed structures". Like water meter housings---

As you've no doubt gathered, I'm very fond of this wonderful creature. I know it's crazy, but given our chance encounter and her unlikely rescue, can't help but feel I was meant to save her.
For now, I need to figure out what to do with my friend to give her the best chance of living out her spider life. Stay tuned. (next installment: George has a new terrarium home and is feeding on crickets!)

Steatoda nobilis, a Noble False Widow. I loved George’s story! Yes, George should be short for Georgette. Her species was introduced to California fairly recently and may not show up in guides to spiders of California for that reason. She’s European. 🙂 Your wife is taking this well. My husband overcame his severe phobia so he could understand why I like spiders and so we can hike to look for them together. One of my favorite memories was watching him walk up to a little spider hanging from the ceiling, so close his nose almost touched it. He looked closely… Read more »

Hi TangledWeb. I really enjoyed your personal experience with your False Widow walking up your sleeve. Our water meters are read remotely, but I wanted daily data. Where do you live? George is now spinning her tangle web in her terrarium. I’ll try and post some photographs.
Cheers,
Gary