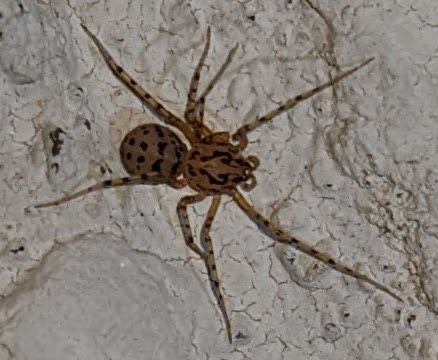 Scytodes thoracica, a Spitting Spider. Now I know why we get photos of them in bathrooms, not outdoors. They're nocturnal, don't have webs, they stand still, they're small, and they look uninteresting and brown without lighting and magnification. I only found this beauty outdoors at night because I had more than 5 light sources, it was on a white surface, and I was carefully hunting for spiders. I guess they're photographed mostly in bathrooms because they are usually well-lit when used at night.

I feel like they are photographed most often inside – because the average member who posts something is not outside looking for them – as well as the member spending most of their time indoors at night and not out looking for spiders at dark…………and so it seems that the Scytodes thoracias are more keen to delve inside and reside in the house setting. In my experience I have never found one inside a residential or building of any sort. I have found hundreds on wooden fences at late night as well as many of those hundreds of S. thoracia… Read more »