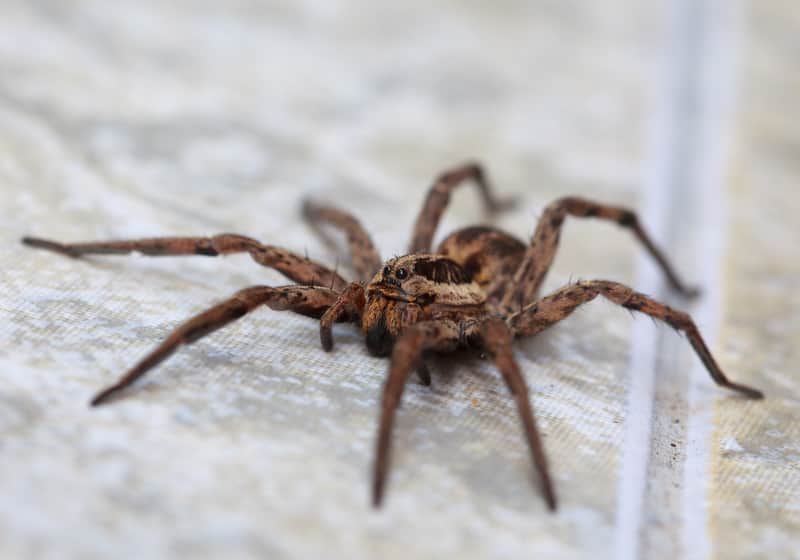 DOES A WOLF SPIDER BITE?
If you’ve ever come across a wolf spider around your home, the encounter was probably memorable. Some people find these giant spiders beautiful and unique, while others shiver at the sight of them. Wolf spiders can also be mistaken for tarantulas, due to the fact each species has a thick, hairy body and an intimidating presence.

Though they may appear menacing, wolf spiders are beneficial organisms. Their diet consists of a variety of pests that might otherwise find their way into your home.

When Does a Wolf Spider Bite?
In general, and despite their menacing appearance, wolf spiders do not pose much of a threat to human beings. While they may be fast and aggressive when hunting their insect prey, they don’t usually bite people unless provoked.

If you do come across a wolf spider, its first impulse will probably be to retreat. If you pursue or attempt to trap it, however, and the spider feels threatened, it will be much more likely to strike back in defense. You may also want to squish it, but you shouldn't as hundreds of spiderlings may run away from their squished mothers.

A wolf spider bite may be painful but should not be dangerous for healthy adults. This is because the venom has low neurotoxic action, therefore it should not do much damage. However, sensitive individuals such as children, elderly and people with compromised immune systems may have some form of negative reaction.

Related > The Difference Between Poisonous and Venomous
Wolf Spider Facts
There are as many as 3,000 species of wolf spiders on record. North American wolf spiders generally range in size from 0.25 inches to 1.5 inches in size, and they are mostly brown and sometimes black in color. They have eight eyes arranged in three rows. Note: Spider eye arrangement is a key taxonomy feature.

Wolf Spider Habits
There are a variety of wolf spider species. Some wolf spider species live in underground burrows while the majority of them are found in the landscape. They can often be found lurking in areas of the yard that provide cover or protection, including:

In leaf piles and around plants or shrubs
In tall or dense grass
Under rocks, stacks of wood or landscaping timbers
Wolf spiders emerge to capture insects but do not trap their prey by spinning webs. Wolf spiders are hunters and find their dinner by sight or vibration. They will often ambush and pounce on their prey, which can range from crickets, grasshoppers, beetles, ants and even other spiders.

Unlike their four-legged namesakes, wolf spiders do not hunt in packs. They are solitary creatures that also don’t care to engage with people.

If you encounter one inside your home, chances are it has come in to escape extreme temperatures outdoors or because it’s following another insect in. Wolf spiders try to move through rooms inconspicuously and at floor level. They can do this by crawling along walls or under furniture.

Treatment for Wolf Spider Bites
If you are bitten by a wolf spider, don’t panic. The area surrounding the bite may become painful and inflamed. The Mayo Clinic recommends taking the following measures to lessen the discomfort:

Wash the bite area with soap and warm water and keep the wound clean
Place an ice pack or cool cloth on the wound to help reduce pain and swelling
Elevate the wound if it’s on the arm
Take over-the-counter medications for swelling and itching. You can also use aspirin or other anti-inflammatory drugs to reduce swelling.
It's always a good idea to consult a doctor if you are concerned about your health after a spider bite or if the wound is not healing properly.

Controlling Wolf Spiders
Here are some simple steps you can take outside of your home to help prevent a wolf spider infestation:

Clear vegetation from around the perimeter of your house.
Remove yard debris such as wood, rock and lumber piles.
Seal any cracks or holes near your home’s foundation and around windows and doors.
Keep exterior lighting to a minimum if possible, as light attracts the insects that wolf spiders like to eat.
To help control wolf spider activity inside your home, take the following measures:

Make sure weather stripping under your exterior doors forms a good seal.
Use sealed plastic storage containers to help protect belongings in your attic and garage and keep spiders out.
Vacuum your house at least once a week.
Clean up food scraps and crumbs that can lure insects, which, in turn, can attract wolf spiders.
Use caulk to seal small gaps under baseboards and in corners.
If your wolf spider control measures don’t seem to be working, or you want the help of a professional from the start,