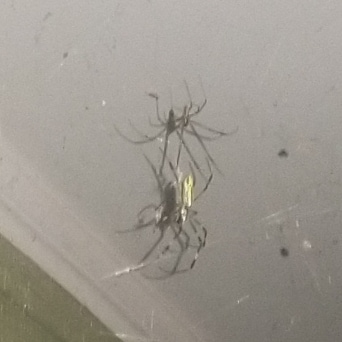 It is living in a communal web about 5 by 3 feet (would be larger but it is on my front porch so I won't let it expand to the doorway.) The web includes about 20 spiders of varying sizes that all look similar. The largest are approx an inch long (body) with maybe a 2.5 inch leg span. They are active only at night, but this could be a product of them living next to the porch light, so the bugs are in abundance at night. There is evidence of some cannibalism as there are occasionally smaller dead spiders (presumably male) next to larger (presumably female) spiders. That does not appear to be the norm as the smaller spiders are often directly next to or even touching the large ones with no signs of conflict. There are also a couple of loners on nearby shrubs.

To be clear, the picture shows two spiders directly beside each other and was cropped from a photo that showed four. The web is still active and I can take more photos. It started about a month and a half ago after my cat died and I had no reason to walk to that side of the porch. I’ve lived in this house for six years and in Georgia for 38 years and can’t recall ever seeing them before. They are not yellow garden spiders as I’m very familiar with those. I thought maybe Joro spiders, which were first confirmed… Read more »

You described them very well. They are Trichonephila clavipes, Golden Silk Orbweavers. They are in the same genus as Joro Spiders. This species does live communally and the females do allow the smaller males to hang around with them. That’s not typical for Orbweavers. Some of the things that look like dead spiders are the shed exoskeletons from molting. They are nocturnal naturally. That includes the dusk hours. Porch lights attract nocturnal insects and many types of spiders take advantage of that. I just found a grass spider with a huge web at the juncture of my house wall and… Read more »

Thank you. I actually did learn of this species in my numerous internet searches and considered it a strong possibility, but none of the pics I found had the same markings. I knew about the husks of former exoskeletons and never doubted that some of them were that, but some seem too different in size to be that. That having been said, I’m satisfied that you’re right and my friends have finally been identified. They’re safe as long as they keep their webs to the right side of my door. I plan to start naming them soon. Any suggestions?

Dracula of Dacula? Queen Midas? Twinkie? My own house spiders just have names like, Big One, Droopy, Windowsill Widow, and Knick Knack. I just gave them some mosquitoes for snacking.